I never cease to be amazed, awed and inspired by Northumberland. It doesn’t matter that I’ve lived here for all 35 of my years; this incredible corner of the world still has the ability to surprise me.

It was en-route home after an inspiring [tiring] walk in the Cheviots that Gordon got a text from a friend. “Where did you get to? I went dog walking along Druridge Bay. If you’re interested, the submerged forest is peeping through the sand at Cresswell.”

Eh? Submerged forest? What the…?

We were miles away from Cresswell. It’s on the Northumberland Coast nestled between Blyth and Druridge, and we were on the A1 coming back from Rothbury; it would involve going 15 miles in the opposite direction to home, and it was already nearing 7pm at this point.

But, a submerged forest. It’s not every day you get a text message like that is it. We had to go and investigate. I mean, what if it was covered over again by the time we got the chance to go back?

We parked up, as suggested by our friend, at the carpark opposite the locally famous Drift Café and headed down to the beach without much of a clue what we were looking for. The beach at Cresswell is breath-taking. If you’ve never been, I strongly urge you to make time to visit. It stretches almost as far as the eye can see from one end to the other, and is the most beautiful clean golden sand you could wish for. The North East is well known for its sandy beaches but Cresswell seems to be the hidden gem of the coastline. Lovely wide flats make it the ideal spot for playing games at low tide, and there are no dog restrictions so it’s a dog walker’s paradise. The village itself is steeped in history too, but that’s a story for another day.

We’ve never walked along a beach with purpose before; we’ve always just been meandering souls, soaking up the evening sun, so this felt different. We saw a patch of what looked like rocks ahead, but as we got closer we saw that they were lumps of wood and perfectly preserved tree stumps. Now had our friend not sent us this message and had we just been on a meander, we probably wouldn’t have looked twice at these. They just look like bits of sea-weathered wood. And they are, essentially, but their modest appearance belies their true wonder. 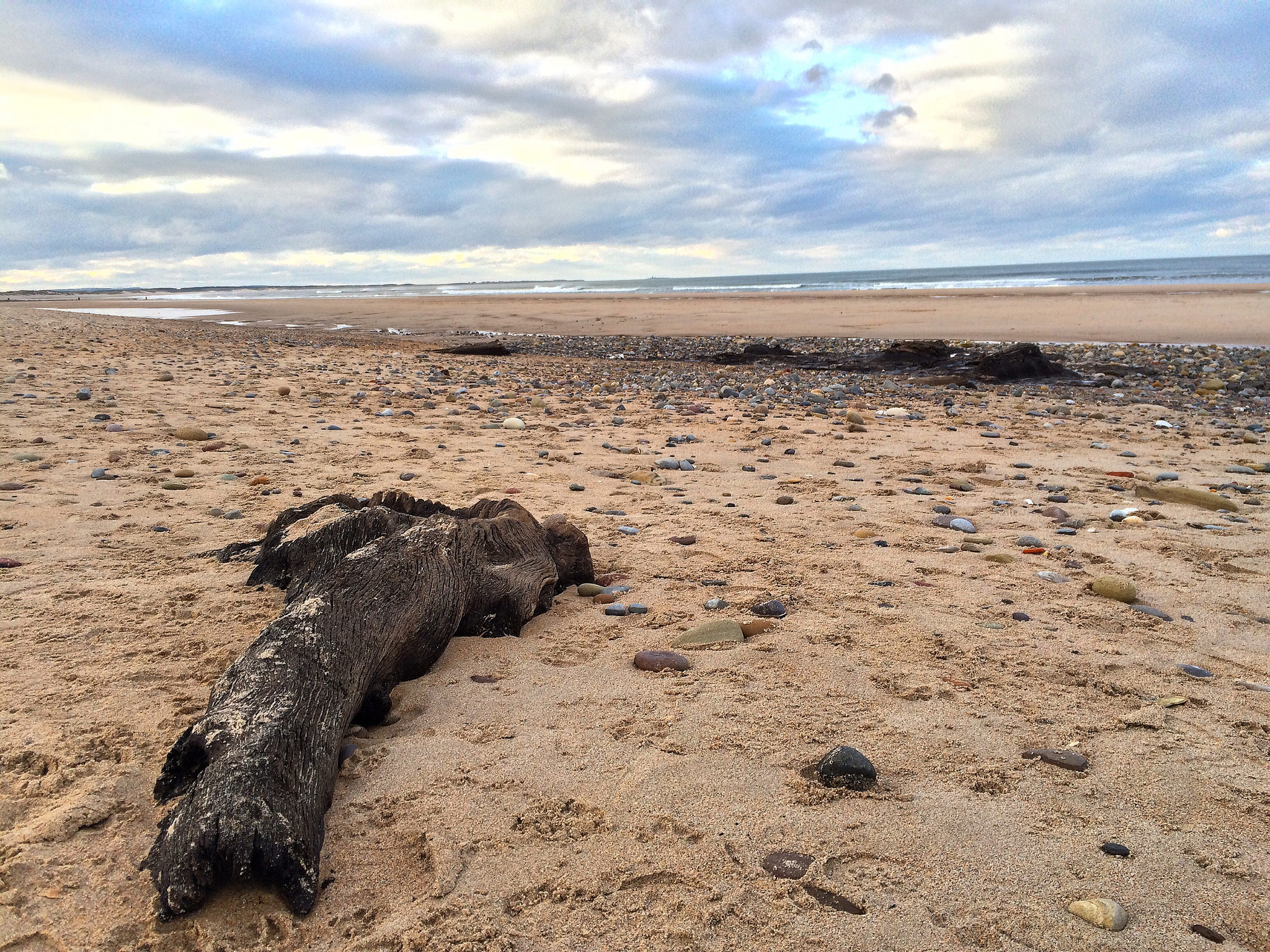 To get a real appreciation of what we’re looking at, we have to go back in time. Back, in fact, some 20,000 years. It’s during the last glacial period, and Britain is a peninsula on what is now mainland Europe. The North Sea and English Channel that now separate us are then a land bridge called ‘Doggerland’, so named because of the Dutch fishing vessels called Doggers which led to its discovery. The stunning sandy coastlines we enjoy nowadays were much further inland and were made up of thick, dense forests of oak and alder. Over the thousands of subsequent years that saw out the Pleistocene and welcomed in the Holocene, temperatures slowly rose. Thick sheets of ice melted and the sea gradually began to encroach on the land, swallowing up the old coastline and slowly creating the British Isles we recognise today. As the old coastlines disappeared, the new ones suffocated the forests, drowning them where they stood.  Submerged in water, these trees don’t rot. They don’t petrify and they don’t mummify. They are a special sub-type of fossilised wood, so seeing them is an incredible and quite rare treat.

We stood, mouths agape at this pseudo forest floor, poking up through the golden carpet. A few people walked past and we found ourselves getting frustrated that they didn’t seem to care that they were walking over 10,000 year old perfectly preserved remains from a time when the sea wouldn’t have even been visible from there. Maybe they were already in on the secret and it was no longer an awesome sight for them. Maybe they just honestly weren’t aware. I mean, had it not been for this chance message, we wouldn’t have been either. 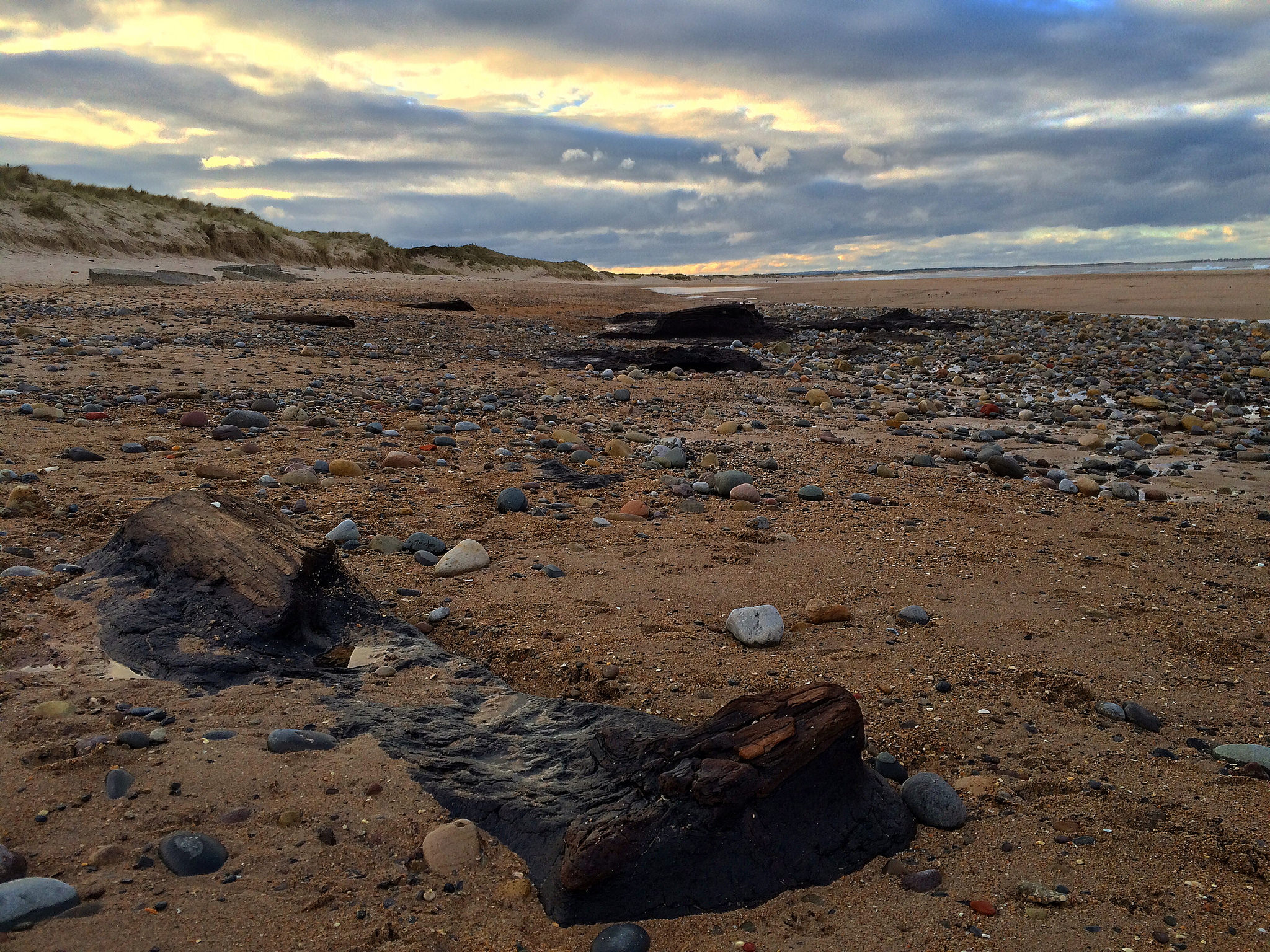 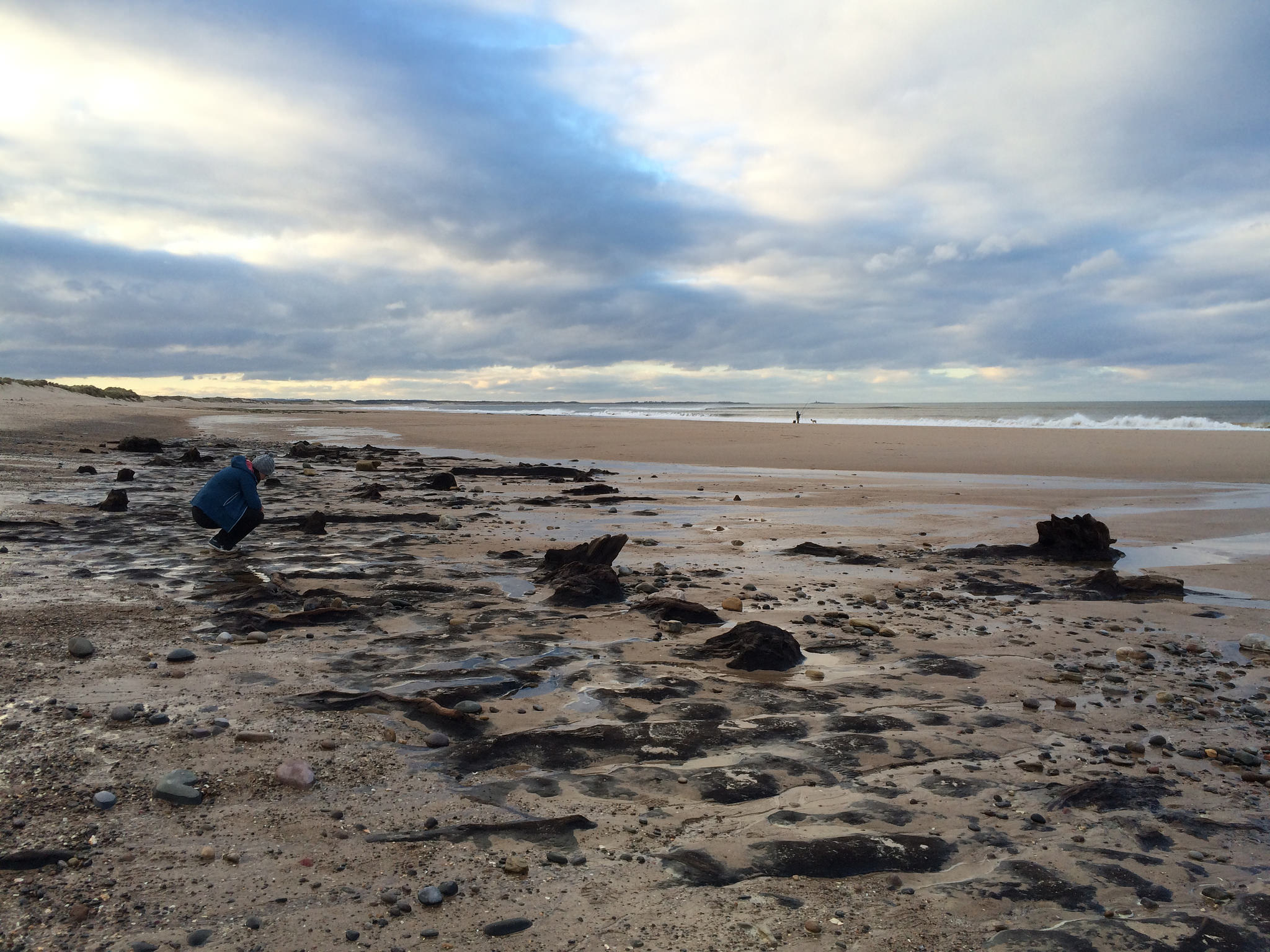 The stumps poke up through a compacted matting of soft dark peat. Fallen branches are mosaicked like parquet flooring, cemented in place by centuries of water and sand pressing down on them. You can see the knots in the wood. You can see roots. Peat has worked its way into the cracks and crevices over the centuries and highlights the intricate patterns on the stumps. Each piece is as unique as the next; you could spend hours gazing at them, trying to imagine what the land looked like in their time. How the air smelled. What the world sounded like when not filled with the hum of industry and the constant drone of cars. 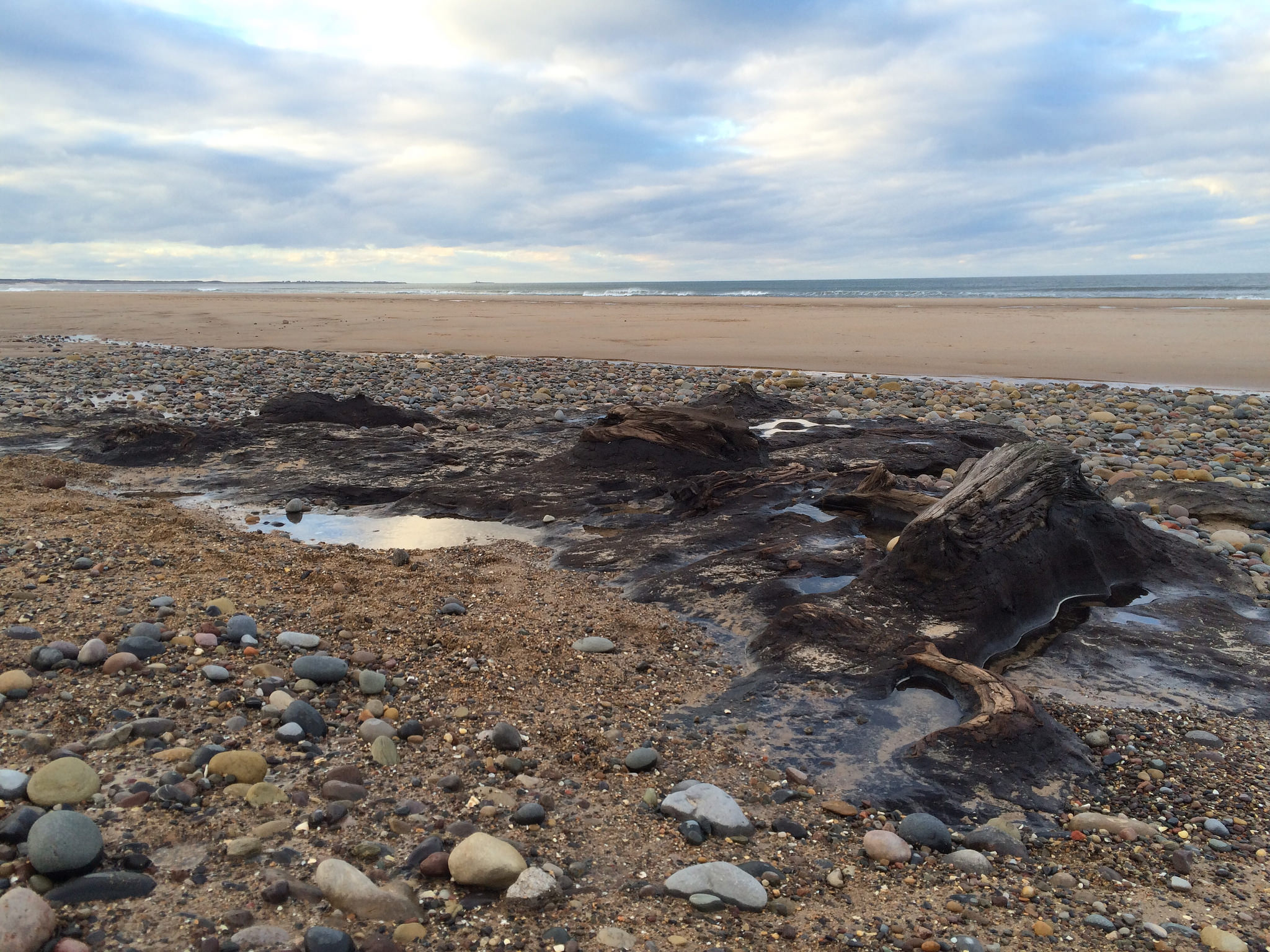 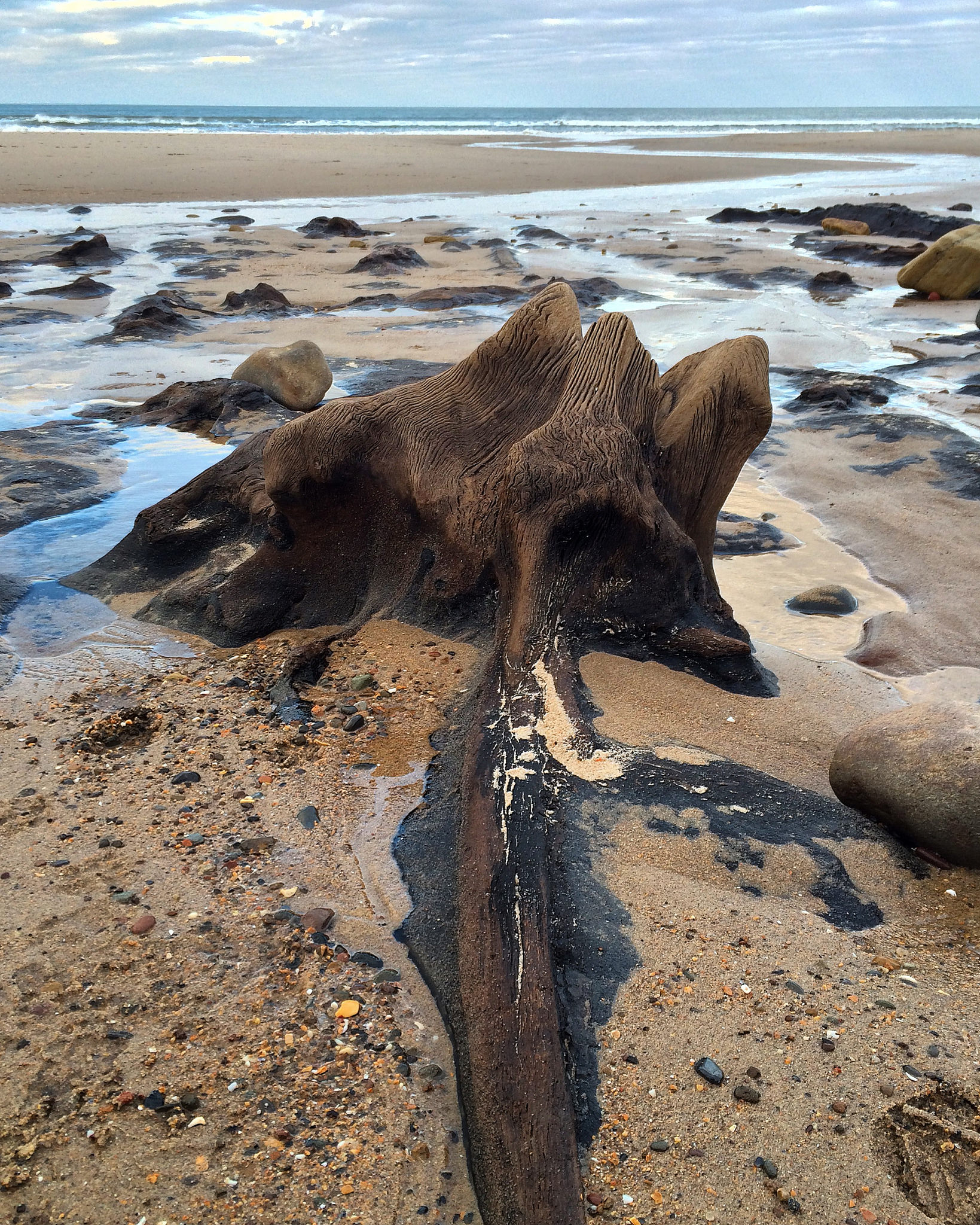 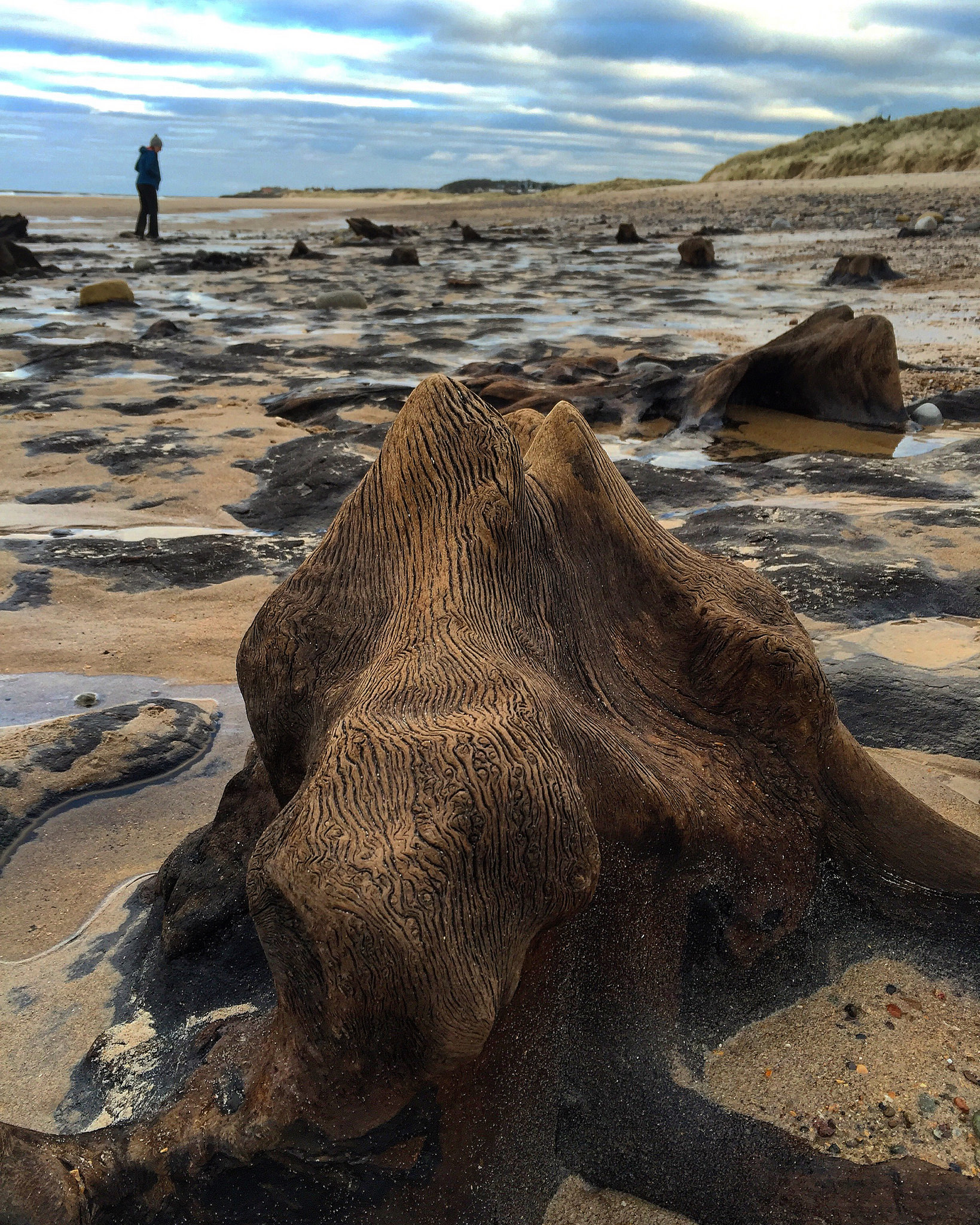 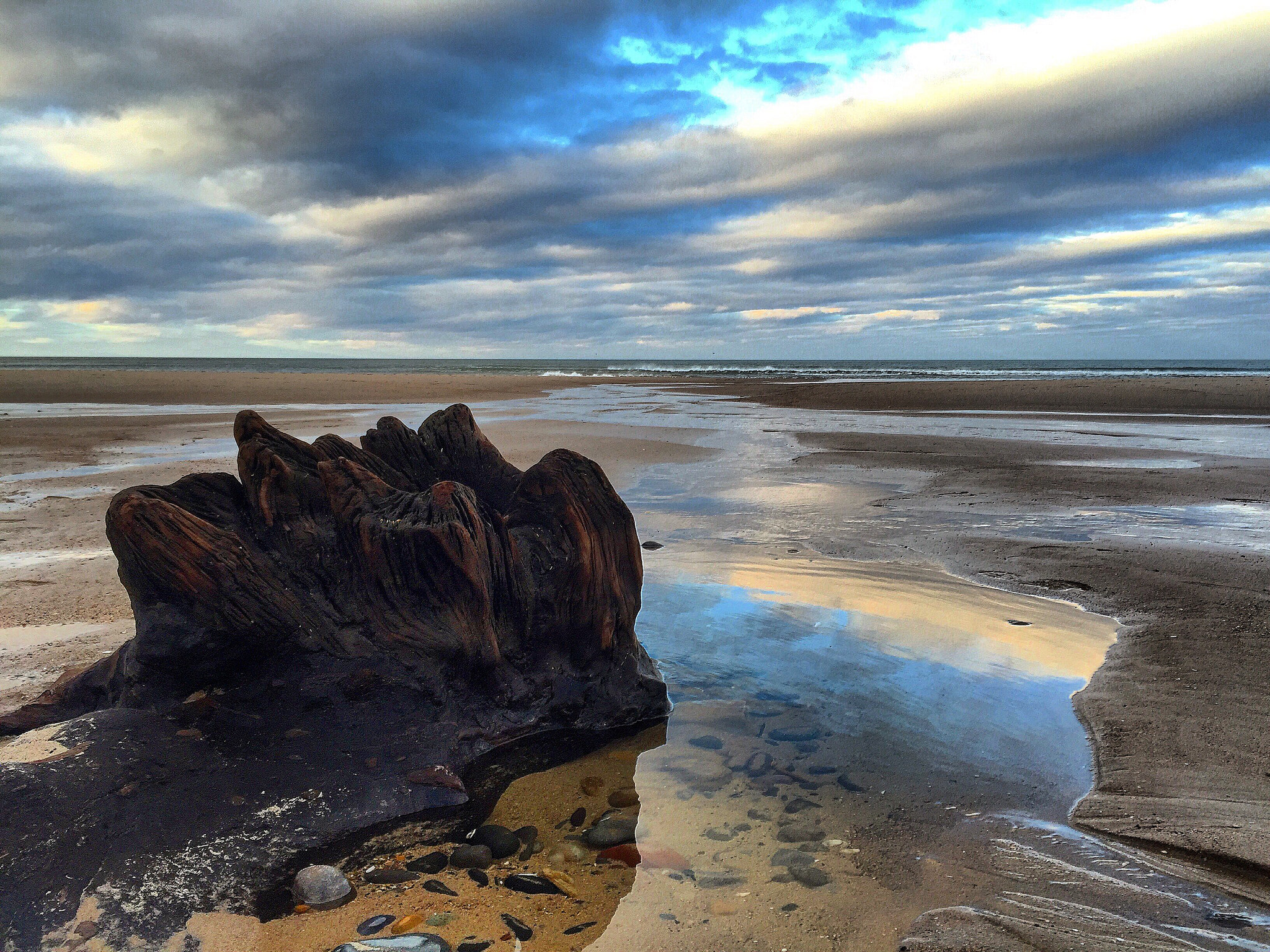 Submerged forests are quite rare. A quick scout about on the internet reveals only half a dozen major sites around the UK, many of which were only uncovered during major storms in 2013-14. This makes it all the more special that our home county is host to one of them. I’m not sure how often these are visible; it may be that they’re a common sighting here for locals and I’d just never heard of them. Regardless, I’m really grateful to have been given the opportunity to see them. I mean, it’s not every day you get to see a prehistoric forest on the beach, is it.

One Thought to “Cresswell: The Submerged Forest”