Some hidden gems are more hidden than others. Some we’ve found just by having a keen roving eye while driving around, but others can only be found though earwigging on Chinese whispers and extensive subsequent Googling.

This particular hidden gem – a wrecked Lockheed T33 Shooting Star jet trainer – was definitely of the more hidden variety. It lies on the military ranges at RAF Spadeadam near Brampton, on a road that leads nowhere, and out of sight on a field which – on any day other than the driest of the year – is an inaccessible bog. Certainly not a ‘chance find’ kind of gem. 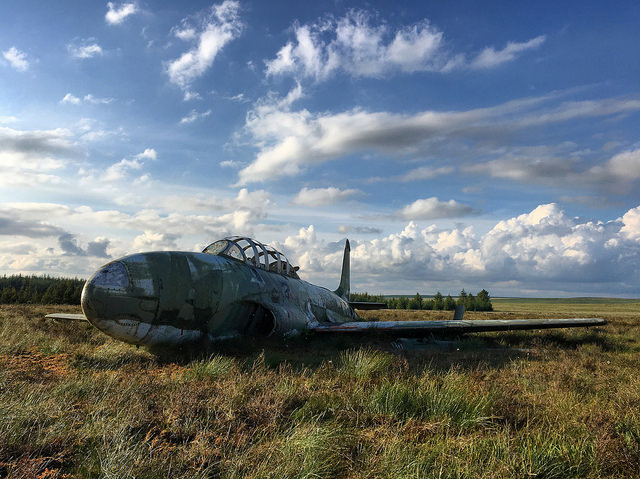 We decided – largely on a whim, as with most of our adventures – to hunt out this purposely wrecked jet on a stunning June day. It was possibly the hottest of the year and because of plans to bike later in the week we were heavily reluctant to let the 25 Celsius disappear over the horizon without soaking up some of its precious rays. With that in mind we headed out west on the A69 shortly after 6pm to find this piece of history.

Turning off the main road just past Haltwhistle we drove through Gilsland; a beautifully quaint village that epitomises country styling, before continuing along the winding road towards the little flag waving electronically on our sat-nav. We drove along the edge of the Spadeadam military zone, easily identified by frequent signage advising not to enter and to keep moving if you’re driving through during live practice. The area is an active RAF base and the land is used for Electronic Warfare training so it’s off limits for public access and strictly no-go if the red flags are flying!

The land has only been in use since 1955 when the Intermediate Range Ballistic Missile Test Centre was built for the Blue Streak missile project; prior to that the area was known as the Spadeadam Waste. The RAF now use the land for training and have a wide range of dummy targets scattered across its length and breadth from tanks to whole villages to this very Lockheed T33 jet.

Pulling up at the roadside we were surprised to catch sight of it poking up over the brow so prominently. We eagerly laced up our hiking boots and set off  trying to find some slim shred of a trodden path over this forbidden land. Surprisingly, we found a fairly obvious pathway which led right up to the jet, leading us to believe that this particular target is a plant by the RAF; a target placed conveniently and strategically close to the road to make it both visible and accessible without too much trespassing, but enough to satiate the appetites of explorers like us.

On the final approach, I felt a strange nervousness rise up in me like a wave. It wasn’t the soggy marshland underfoot breaching the top of my hiking boots. It wasn’t even that we were technically trespassing. It was the magnificence of it. It was just sitting there. Resting on the land like a bird weary from flight. Its metal skeleton tarnished from years of neglect and decay. Shards of panelling strewn round it like tattered rags. 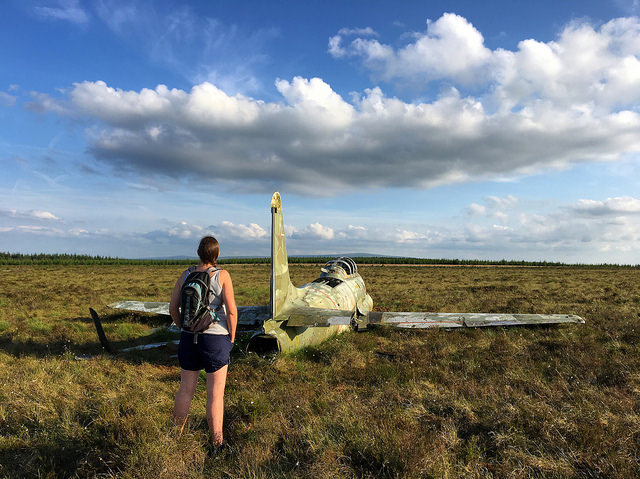 The engine is still relatively intact and remnants of its interiors can still be seen. The windscreen at the front is long smashed to smithereens and a metal framework has been bolted across the cockpit presumably to prevent people climbing inside. The faded paintwork and technicolor rusting would make it blend into the landscape if it weren’t so grand and imposing. 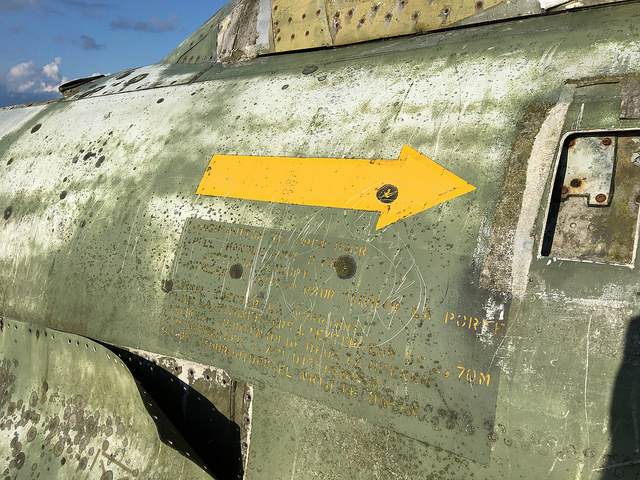 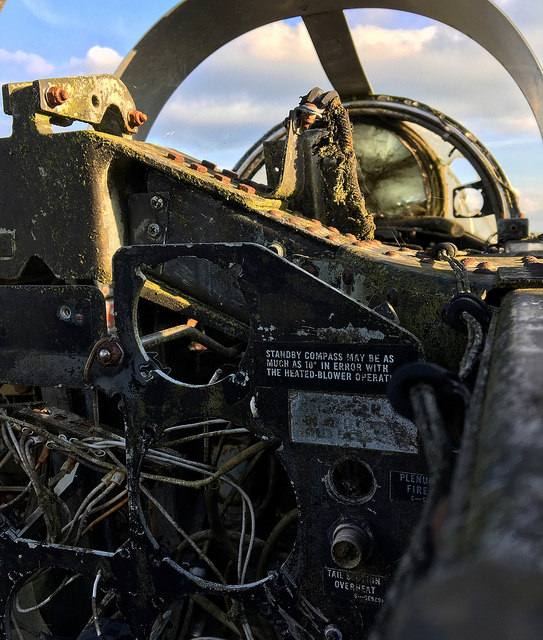 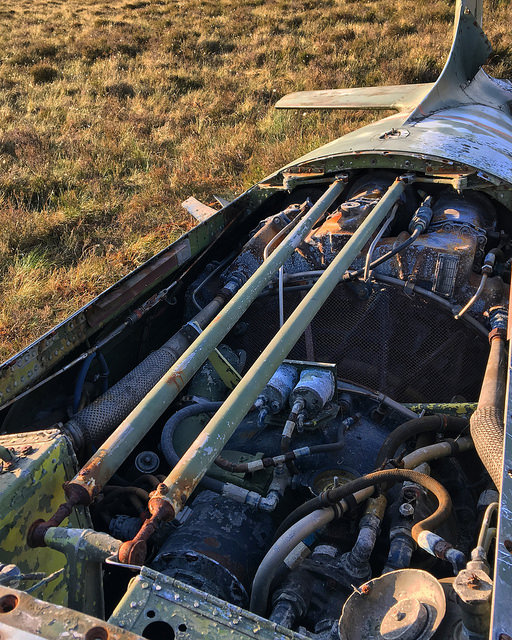 I’ve never been up close to an aircraft like this and I have to admit it sent chills down me. Where has it come from? What wonders or atrocities has it seen in its time? Its eerie presence on this patch of bog is for purely practical and educational purposes, but somehow it feels like more than that. Its looming profile, silhouetted in the fading evening light acts as a warning that our military need to use this land for practice. It also acts as a reminder. A reminder that whether we like it or not, our military need to use this land for practice. 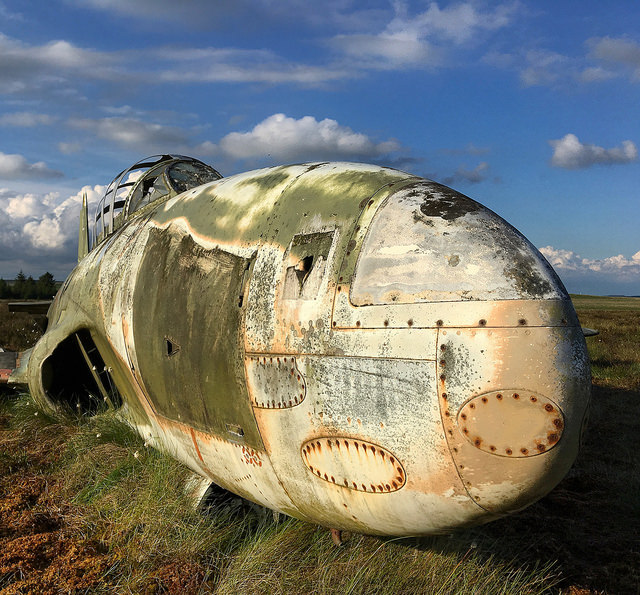 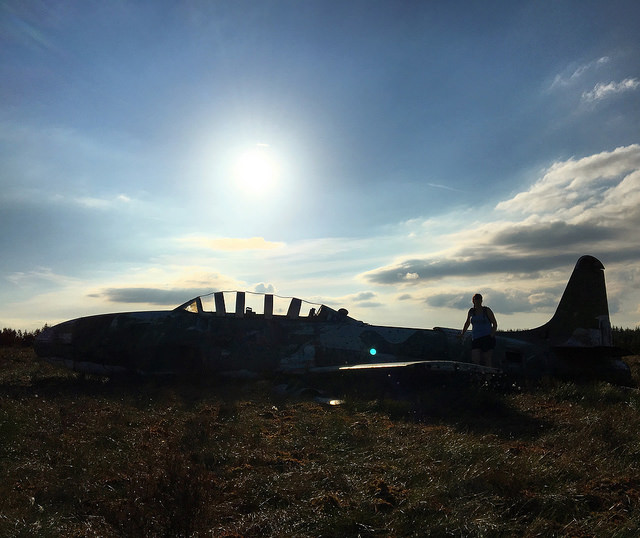