I have memories from my childhood of picking blackberries with my Ma and brother. We’d head out during the autumn half term holidays (otherwise known as ‘blackberry week’) to my Ma’s favourite local spots for picking and we’d spend a few hours in the sunshine getting hooked up on the brambles, getting our legs scratched to pieces, but at the end of it we’d head home with tubs full of plump juicy berries for Ma to turn into jam or pies. 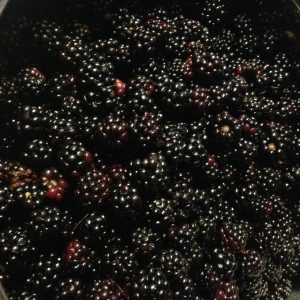 I didn’t realise it until many years later, but those were really precious times. As a child full of bouncy energy it must’ve been nice for my Ma to have us focused on a productive activity. We probably spent as much time roaming around looking for good branches as we did actually picking, but those few hours were a chance to spend some genuine quality time with my Ma, and I wish I’d made better of it at the time.

She always foraged; maybe not as widespread and dedicated as we both are now, but growing up I always knew that there was free food to be had at certain times of the year. Now, as an adult, I seem to have a growing penchant for taking advantage of the free bounty on offer and have made it a personal project to seek out some of the best spots for picking a wide variety of fruits and leaves to make use of in some way. 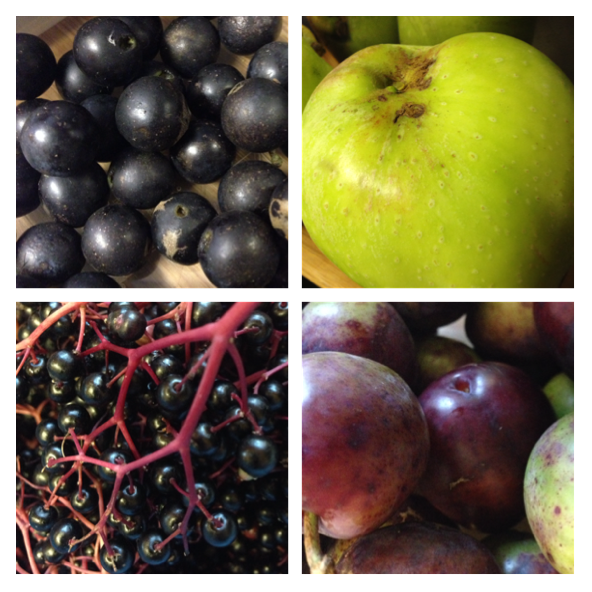 This personal project was piqued about four years ago when, on a lazy Sunday in September, I dragged Hogs out to pick some blackberries with the promise of making him some jam. We headed down to Holywell Dene – my childhood playground, being a literal stone’s throw from my Ma & Da’s house – in search of some good picking and found far more than just blackberries. On our travels we found blackberries, a few plums, sloes (although they weren’t ready at the time), and some apples. Admittedly the pickings weren’t great and we got very little in the way of plums and apples, but it set my mind racing about where else these delights might be hiding in plain sight. 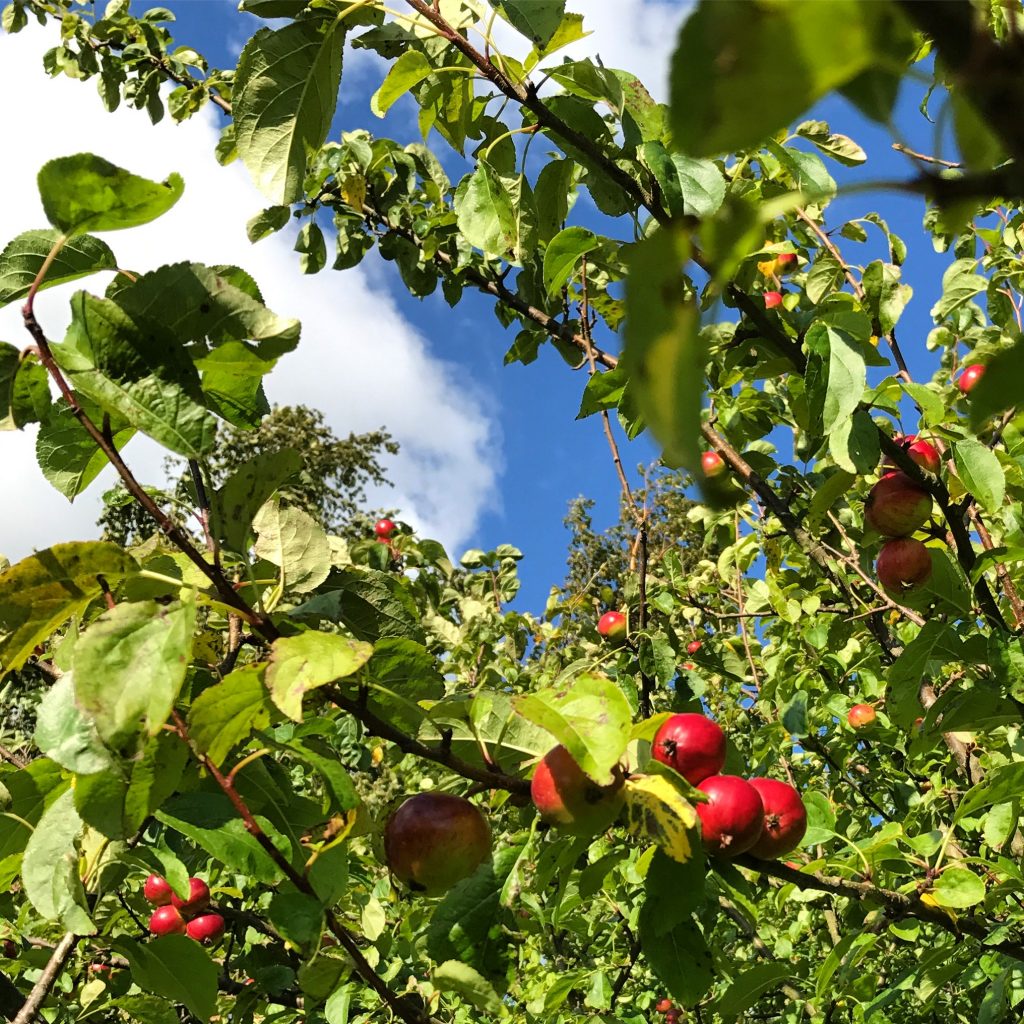 Fast forward a couple of years, and I’m out running in the nature reserve over the back of the business park I work on. As I head down one particular stretch of muddy track I catch sight of a tree on my left utterly dripping with crab apples. Their skins, blushing red, shone like beacons in the early evening glow. I vow to go back armed with a rucksack, but not ten metres further down the track I find another, and another until I eventually count eight crab apple trees. Dotted in between them are plentiful rowan trees hanging with bunches of the reddest rowan berries I’ve ever seen, and blackthorn bushes – more than I’ve seen collectively in my life – with branches so heavily laden with sloe berries it would take from the first frost to the last frost to pick them all! This would become the first in my personal catalogue of picking spots, and it’s just an added bonus that there are plentiful blackberries along the edge of the old railway line in the very same nature reserve too.

It seems like now I can’t stop noticing foraging spots when we’re out on our travels. While walking on the Harbottle crags last year we chanced upon bushes laden with bilberries. On a dawn walk in Peebles I found a long stretch of wild raspberry bushes,and just this week while riding along the Newcastle Quayside I found a bounty of ripe elderberries. 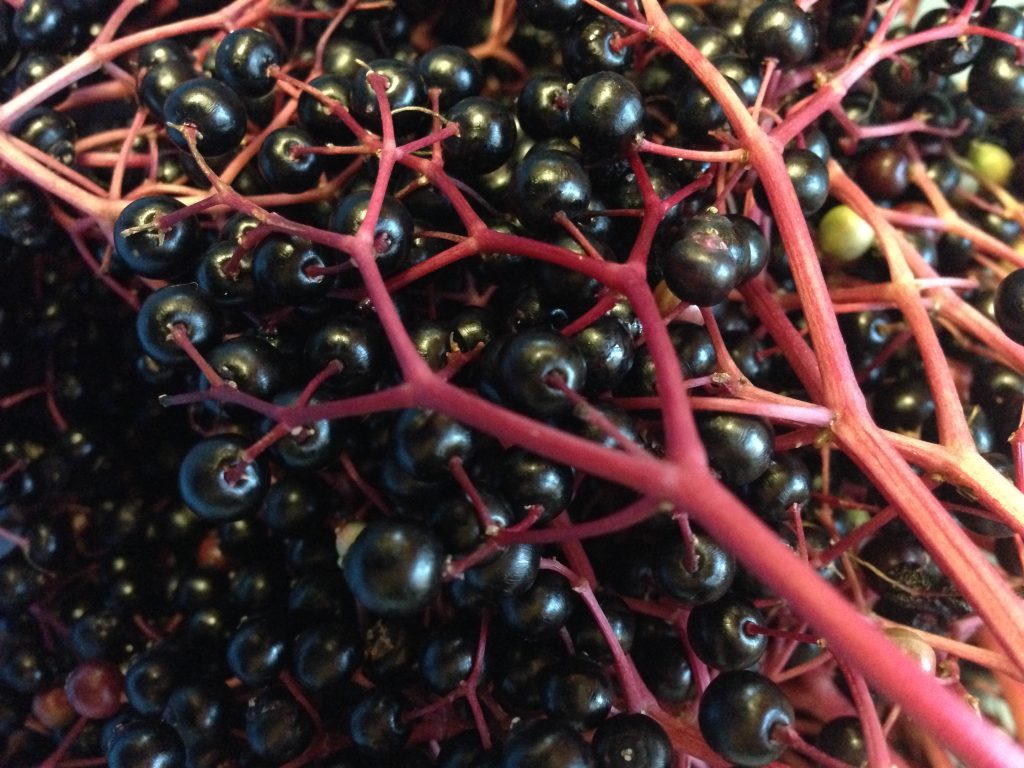 As well as wild spots, friends and family now offer up the fruit from their own trees to me, knowing that it would otherwise go to waste. It pains me to think of such abundant free food not getting used. It’s not just fruit either. Young nettles can be put to good use in place of spinach in curries etc. Ramson (wild garlic) is plentiful in many woodland areas and makes a tasty addition to salad leaves or to flavour olive oil. Fungi I’m far less confident with, but I can identify a couple of easy ones – the cep and the hedgehog fungus which are both meaty and tasty.

My foraging efforts aren’t for any money-saving purposes. It’s easier and cheaper to buy a jar of strawberry jam from the supermarket than it is to go to the trouble of picking the fruit, making the jam, and putting it into jars (as an interesting but annoying side-note, empty jars, even when bought in bulk, are still more expensive than buying cheap jam from the supermarket…), but the taste of foraged fruit is far superior to that of the cultivated fruit you get in commercial products, if indeed you can get a commercial version. Bilberries, for example, aren’t cultivated because they’re too small and time-consuming to harvest; their cousin the blueberry is the favoured for its larger and easier to pick size, but bilberries are far sweeter and tastier. Most of the fruit I’ve foraged can’t be bought commercially with the exception of blackberries and plums, however, although the foraged varieties are smaller they’re also much tastier.

Our freezer is bulging at the seams with foraged fruit. I’m saving it all up to have a big jam-making weekend rather than doing it in dribs and drabs (more cleaning up that way!). In the mean time, I’m still always on the look out for more foraging spots.

I’ve put together a little map of some good foraging spots I’ve found around Northumberland. If you know of any others, let me know and I’ll add them so we can share the free food love.

One Thought to “Northumberland: Foraging”